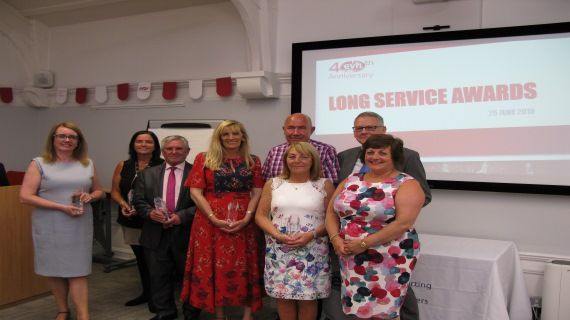 We held our sixth Long Service Award ceremony in Betty's Room in our EVH offices on Monday 25 June 2018.  It was great to celebrate governing body and staff members who have given so much of their time serving their organisations.

We had 21 nominations (8 Governing Body and 13 staff members), six nominees chose to attend our Awards ceremony along with friends and family.  A light buffet and refreshments folowed the ceremony, giving nominees time to network and celebrate their magnificent achievement.

Due to holiday commitments some of the other nominees will attend a future ceremony with others requesting their award to be dropped off at their office with no fuss, while others have chosen to have their award presented locally at their organisation - so EVH will be on out and about getting these organised.

The six nominees who received their award from EVH Chair David Rose and EVH Recruitment Manager Susan Campbell were:

The other nominees who will attend a future ceremony, have their award presented locally or have had their award dropped off are:

We have now presented over 100 awards (110 in fact!), we are so proud that so many people have given so much time to their organisations and reach such a significant milestone.

We hold two award ceremonies throughout the year - June and December, so our next ceremony will be held in December 2018 (date to be confirmed).